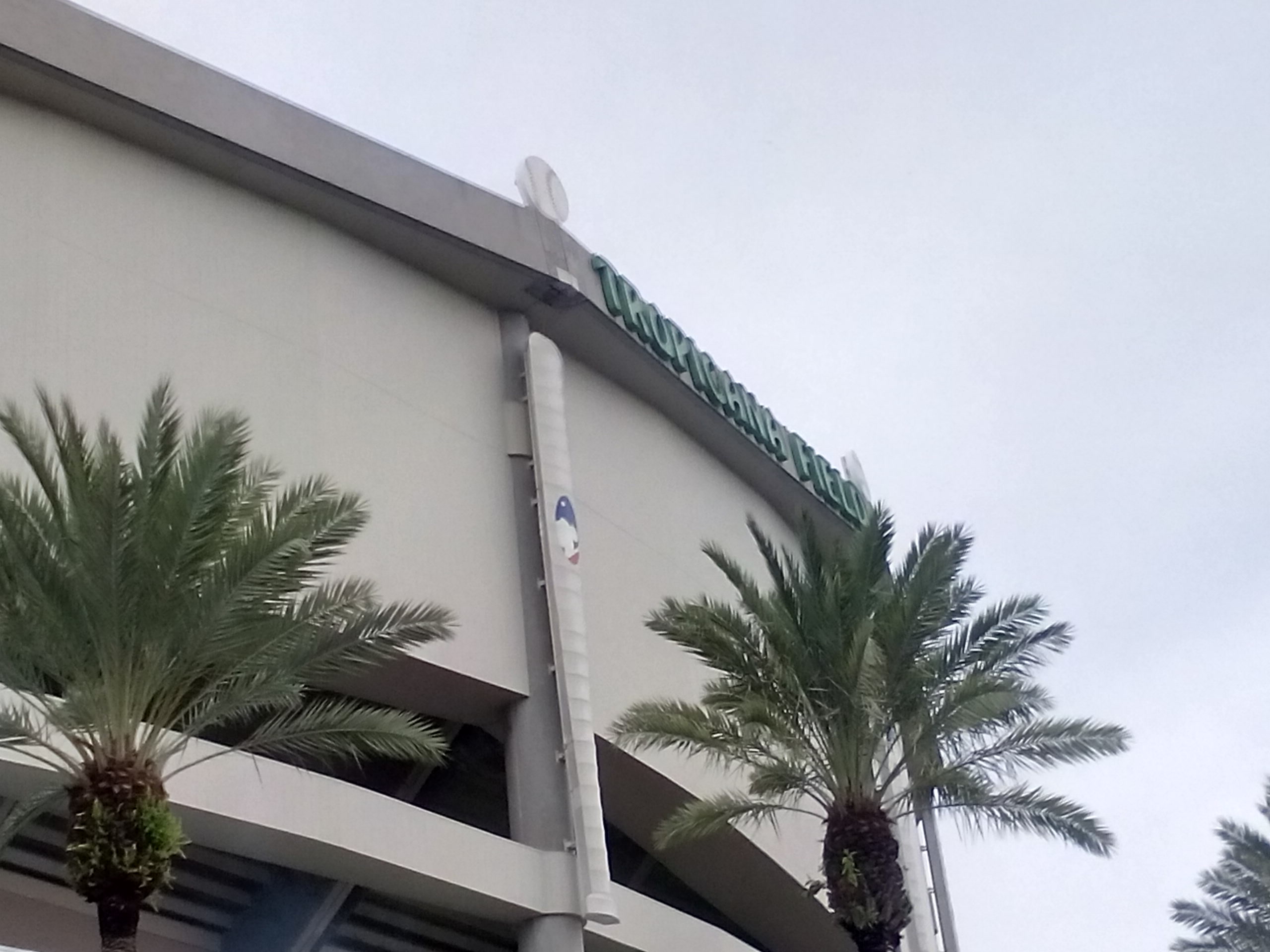 Tropicana Field or “The Trop” was a stadium that crossed my radar for one reason and that was because the Yankees were coming to town for a game.

It was during Derek Jeter’s farewell tour so this game was a must see and the first game I actually planned out in advance to attend.

Here are my thoughts on Tropicana Field. 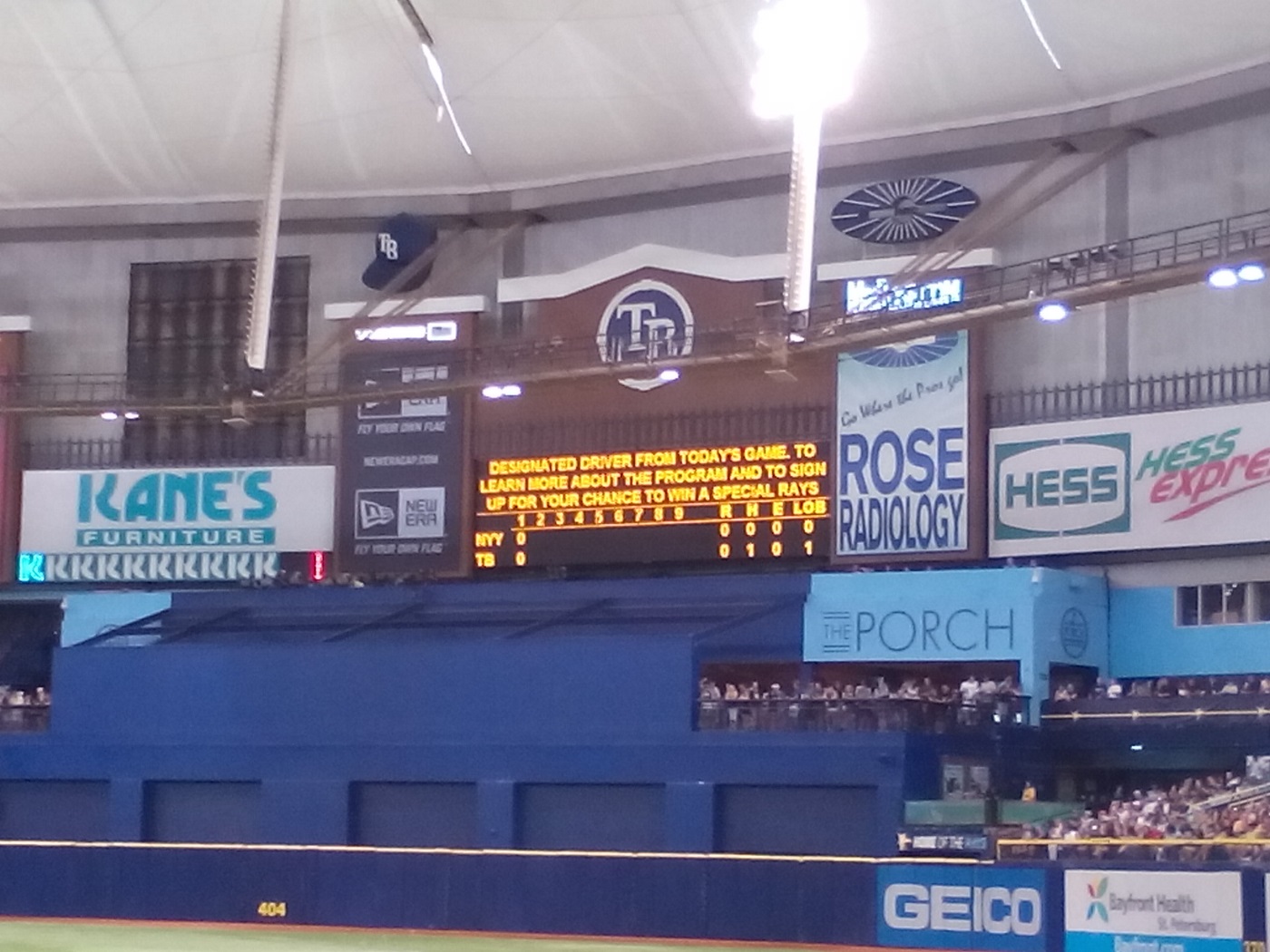 The first thing that stood out about Tropicana Field was the exterior design. It is a domed stadium with a slightly slanted roof. It was something that was different from other domed stadiums I have been in or seen from outside.

Tropicana Field has a lot of options for families to enjoy the full game day experience. Their interactive experience is one of the best I have gotten a chance to see as it provides games and photo opportunities for not only the children but the adults as well.

There were an enormous amount of food options throughout the ballpark. No one can leave Tropicana Field and state that they left hungry as the options outnumber the patrons. The parking for the stadium was not bad as I found parking in a nearby lot within a block of the ballpark for $10. The traffic surrounding the stadium is minimal due to no other big venue causing traffic concerns for the area. 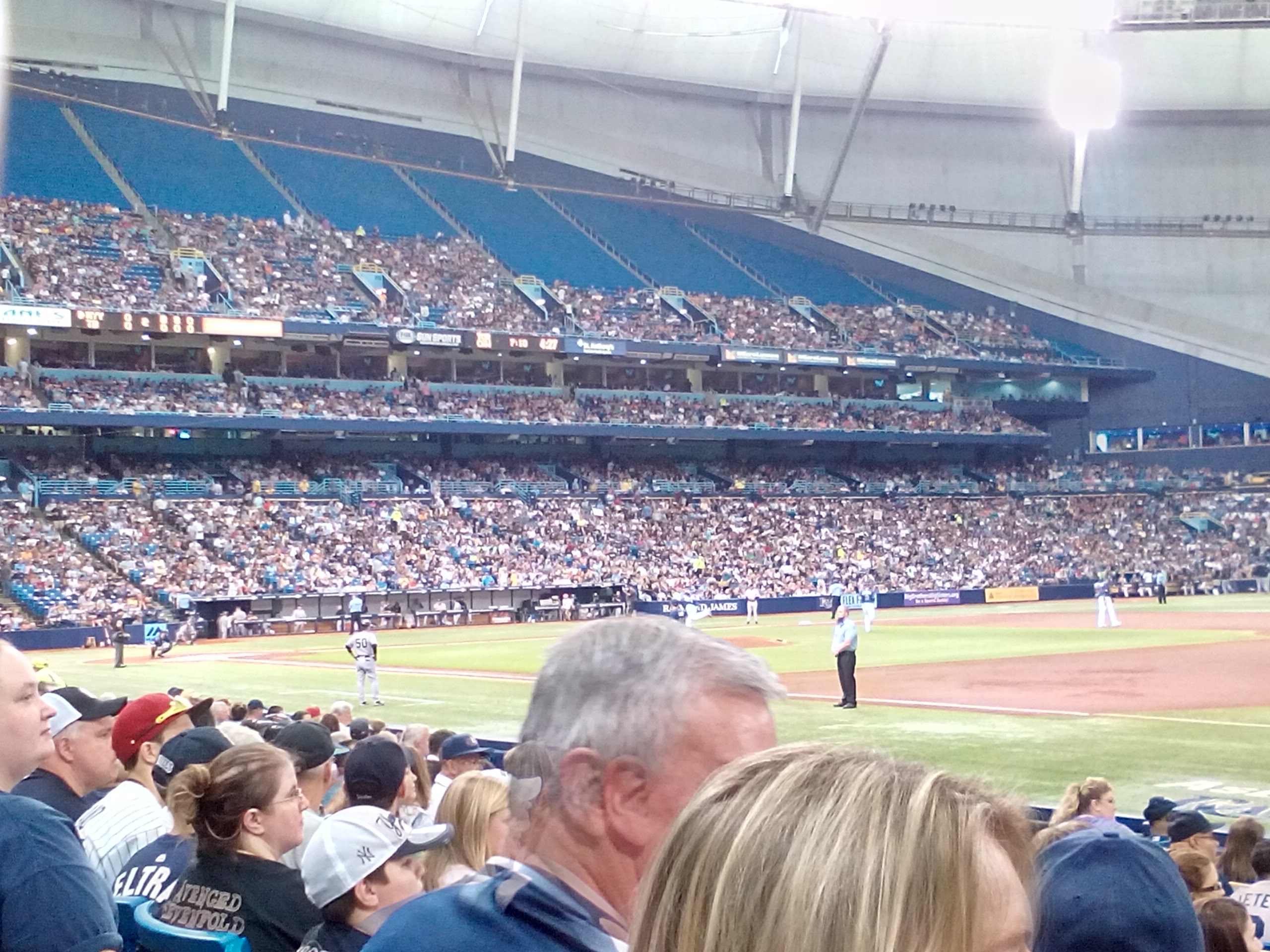 The biggest thing that stood out to me during my visit was the fan support for the local team. While in attendance I didn’t hear many Rays fans rooting for the team.

The New York Yankees were the visiting team but the crowd was slanted 80/20 towards the Yankees. As a spectator that likes to integrate with the local fan bases on my visits this stuck out the most to me. 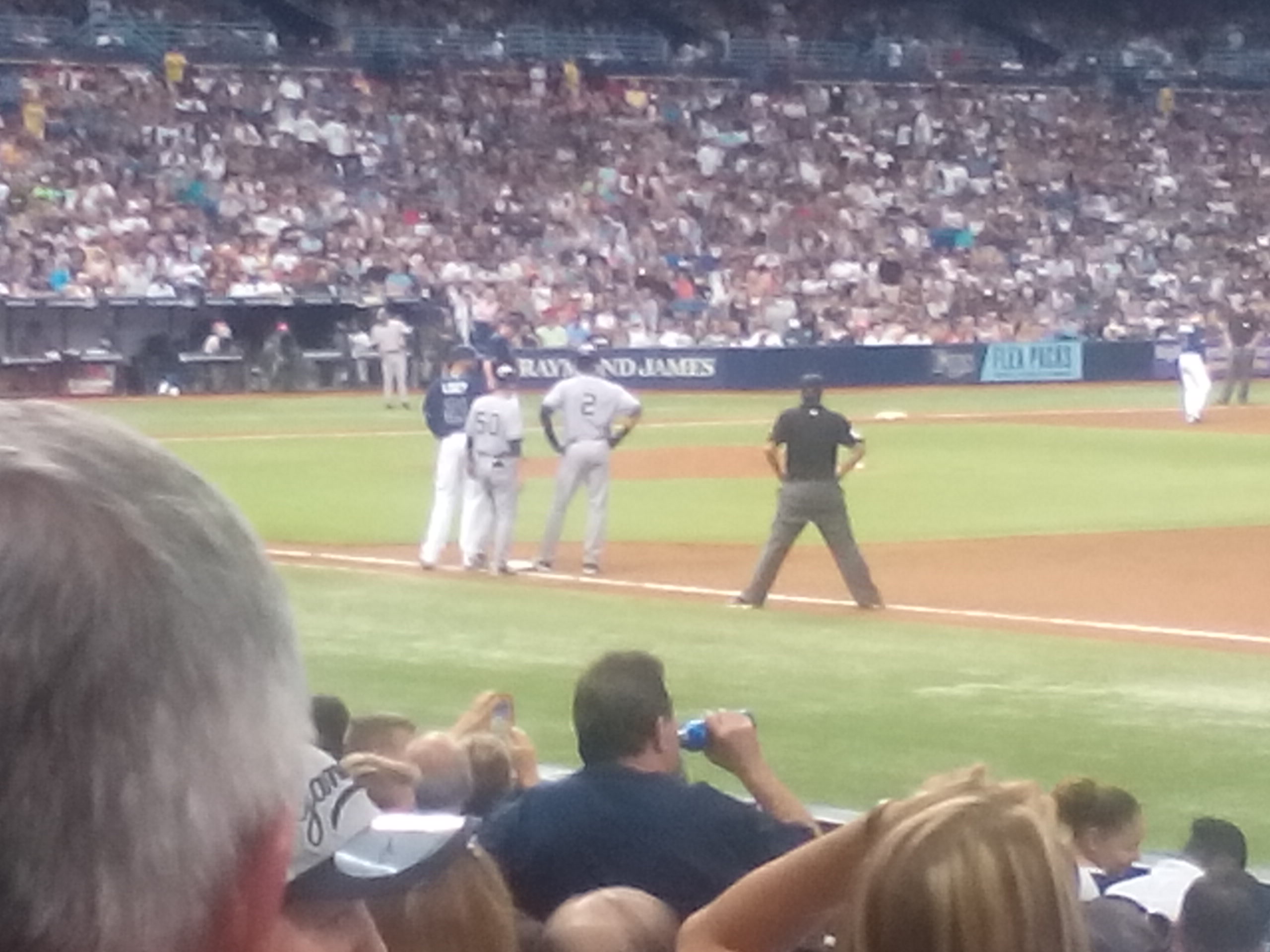 The concession pricing was sort of pricey at the stadium and seemed to cater more to the local population of St. Petersburg when listing prices. This can make families taking their kids to the park an expensive event. The tickets for the game were also high but that was more than likely because of the opponent.

The team shops within the stadium left me disappointed because they had the visiting teams hats and jerseys for sale which is the only time I have witnessed that. The stadium seemed to cater to the large Yankee contingent that lives in the Tampa Bay/St. Petersburg area and not their own team.

I would give Tropicana Field a 6.5 out of 10. The fan support for the team is lacking and the stadium does not provide a great atmosphere for baseball. They location of the stadium is the greatest benefit because it isn’t restricted by any other venue and traffic in the area is minimal. The concession prices could be lower but they are catering to their local economy so it is understandable. 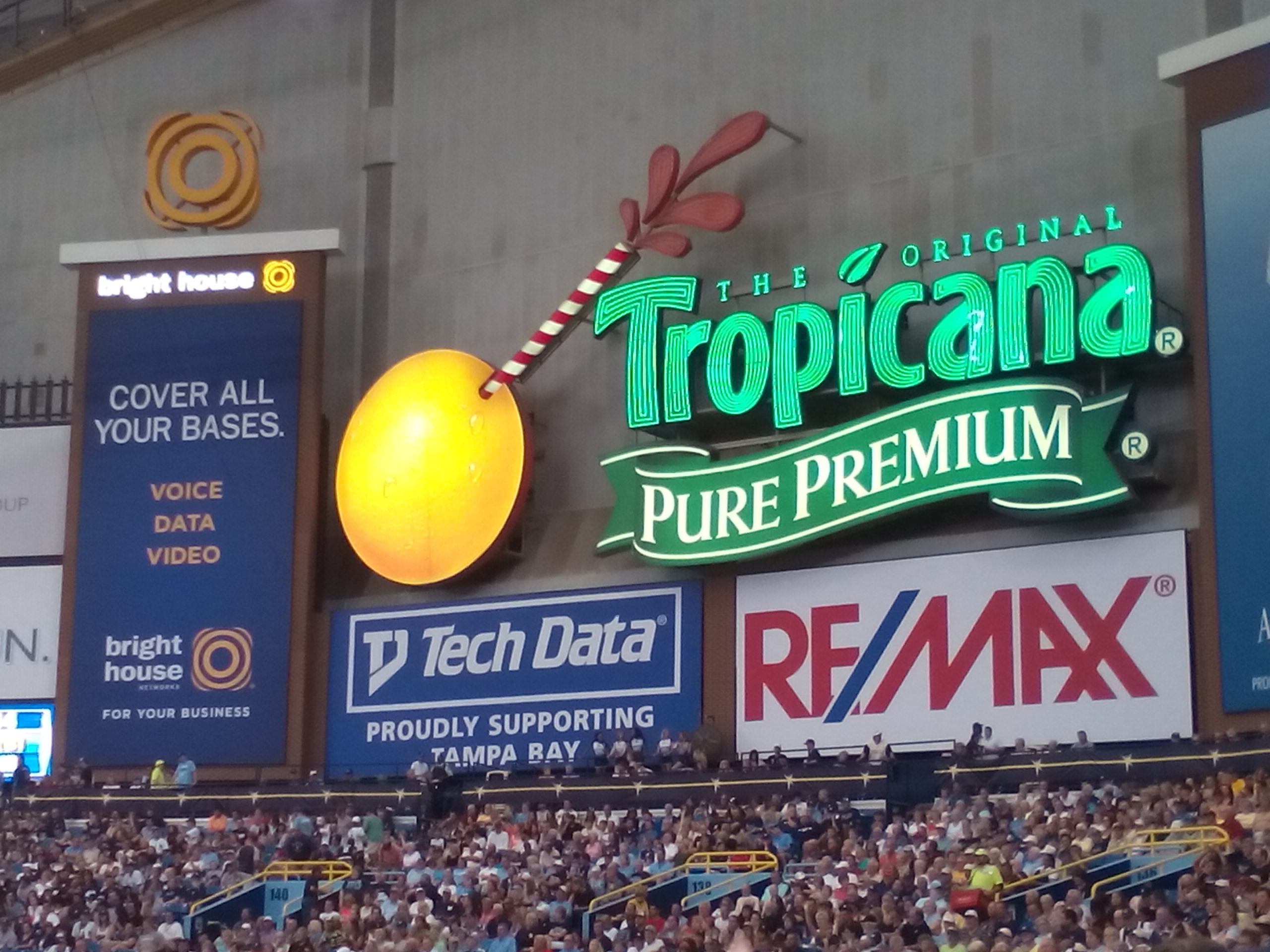 About the author: Wesley D. Smith

Hi, I'm Wesley, and I experienced my first major sporting event when I was 14 years old. Now as an adult, my ambition to attend a game at every MLB, NBA and NFL venue has only grown and the list of venues I want to visit longer.