Home / The Blog / Where The Game Was Made

Every week in the game of college football, the pundits always label one game or another THE BIG GAME. Those games are typically played by a Power 5 member school and televised nationally. Those games are fun to watch but don’t acknowledge the origins of what makes the Power 5 schools what they are today. Today’s Power 5 programs are filled with players that once exclusively graced HBCU campuses all over the country. When I search for college football games to attend and enjoy the pageantry, I always look to see which HBCU game is being played near me. As all college football fans know, Labor Day weekend is the official start of the season. Out of importance, I always look to get out to an opening week game to see what the new season will provide. This year, I traveled to Montgomery, AL to see Alabama State University battle their bitter rival Tuskegee University in one of the oldest match-ups in all of Black College Football. A gridiron rivalry that dates back to 1901 and just concluded it’s 101st installment has been highly contested between these schools separated by 37 miles. 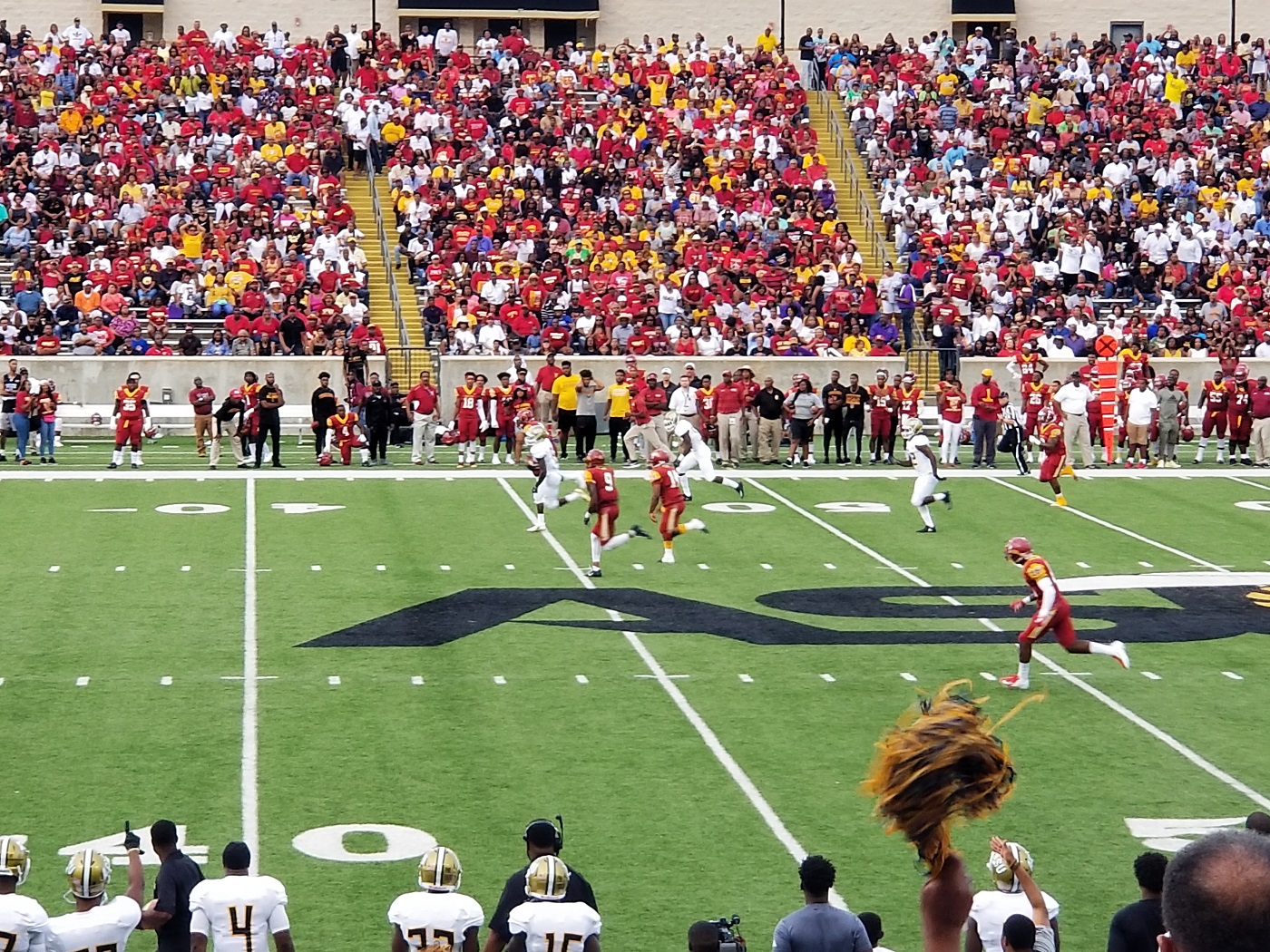 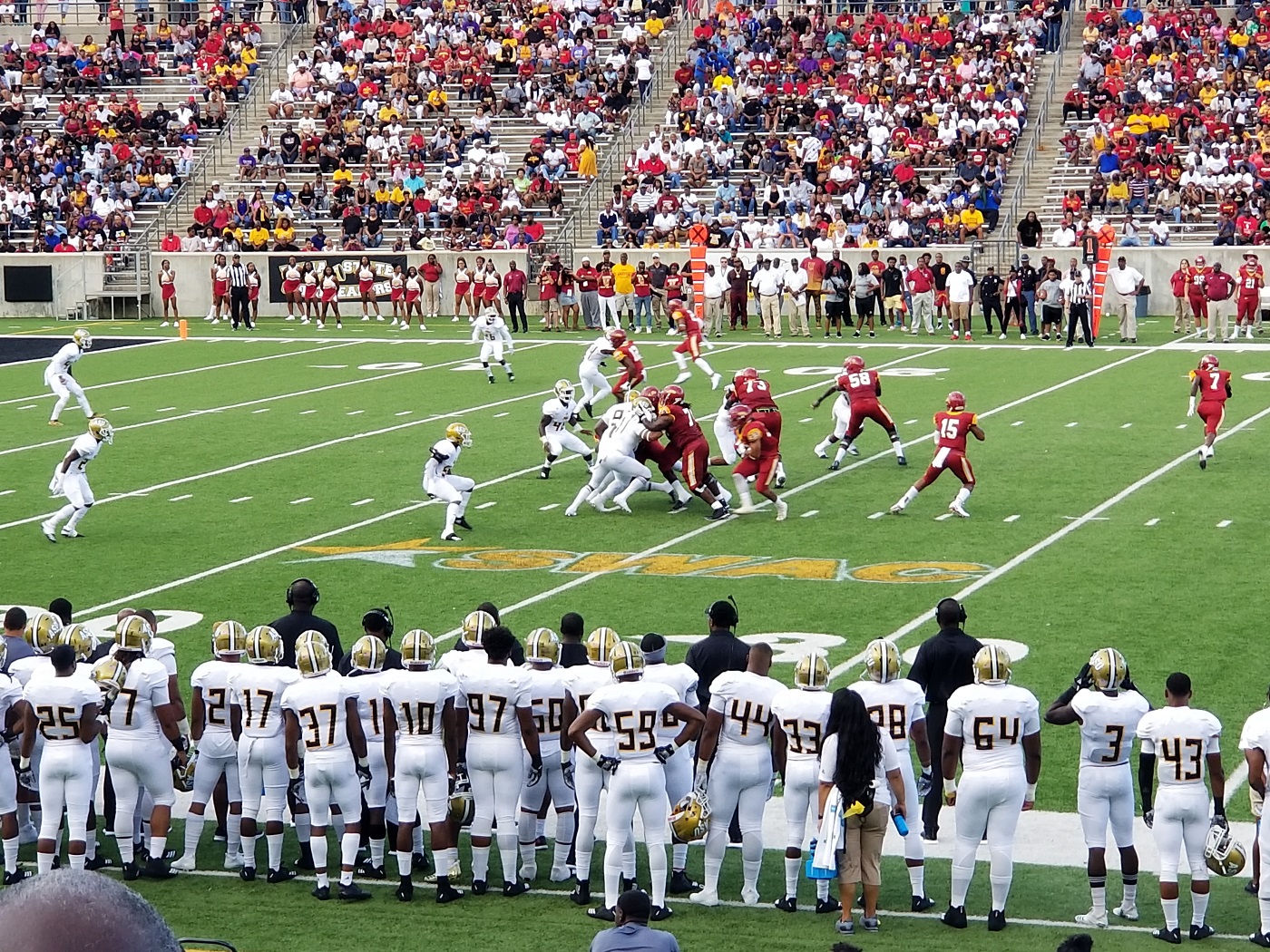 This historic match-up has traditionally been played on Thanksgiving Day but was moved to Labor Day weekend when it rebooted in 2017. With Tuskegee winning the inaugural Labor Day Classic over Alabama State 14-6, this years match-up was must see football. The Tuskegee Golden Tigers started the game on fire as they returned the opening kickoff 55 yards before needing 8 plays for Justice Owens to put the ball in the end zone. Alabama State responded with a 15 play drive that took over 6 minutes off the clock but yielded zero points. After receiving the ball on downs, Tuskegee used a series of runs up the middle and screen passes to drive down the field before Ricky Haley blocked their field goal attempt. 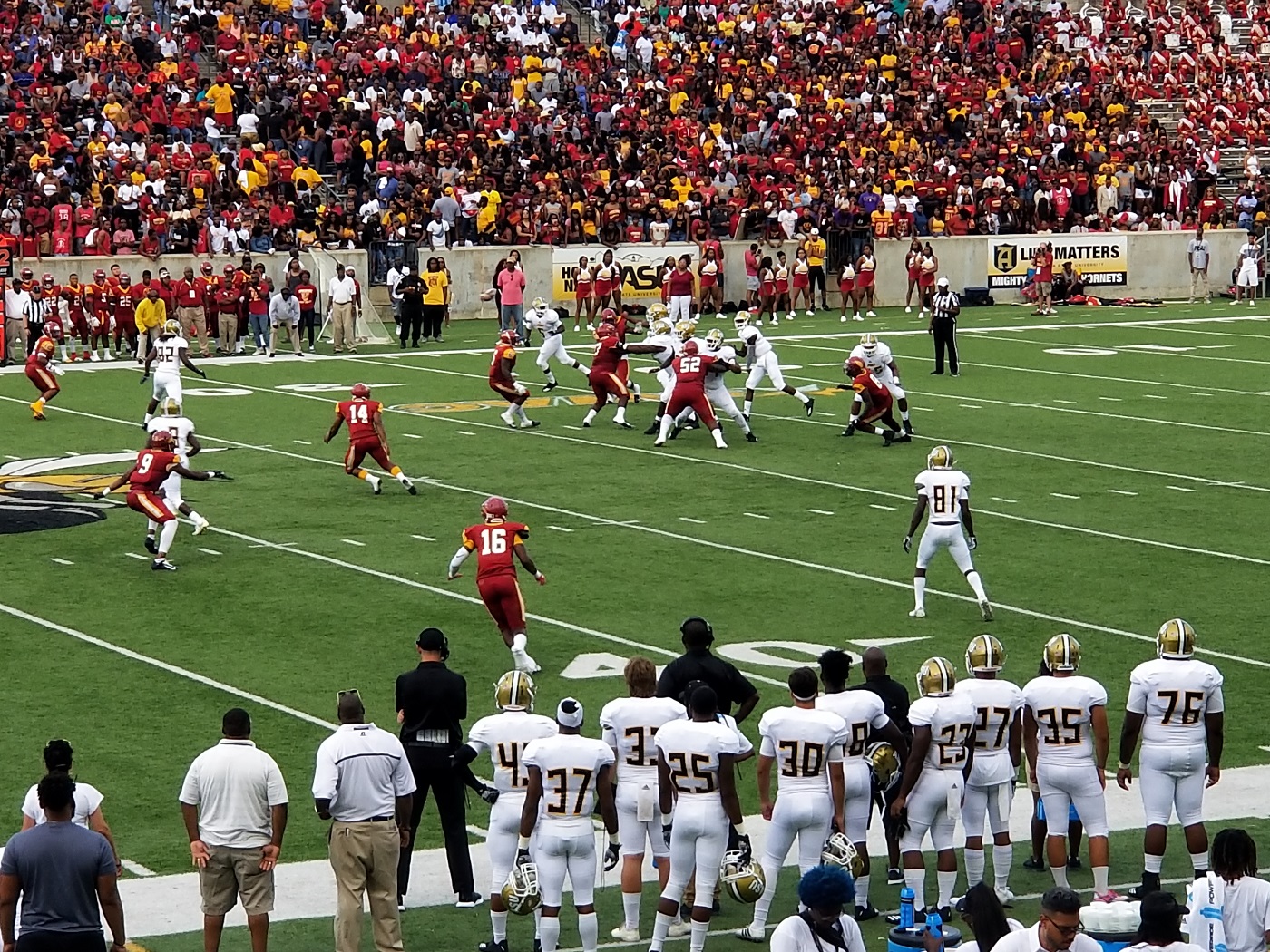 The second quarter started with Alabama State looking to get off the mat and show their worth. After a couple of hit or miss plays, Darryl Pearson Jr. found Tyrek Allen across the middle for a 68 yard touchdown. After this score, each school showed they were here to play and the game was officially on. After Alabama State’s score, Tuskegee responded with a 7 play 75 yard scoring drive that took 3 minutes off the clock. Dalton Hall missed the extra point for Tuskegee and as we know in sports every point matters. Alabama State responded with a 3 and out before immediately getting the ball back by way of an interception from Darron Johnson. The interception led to an Alabama State field goal to make the score 13-10 Tuskegee and end the first half scoring. 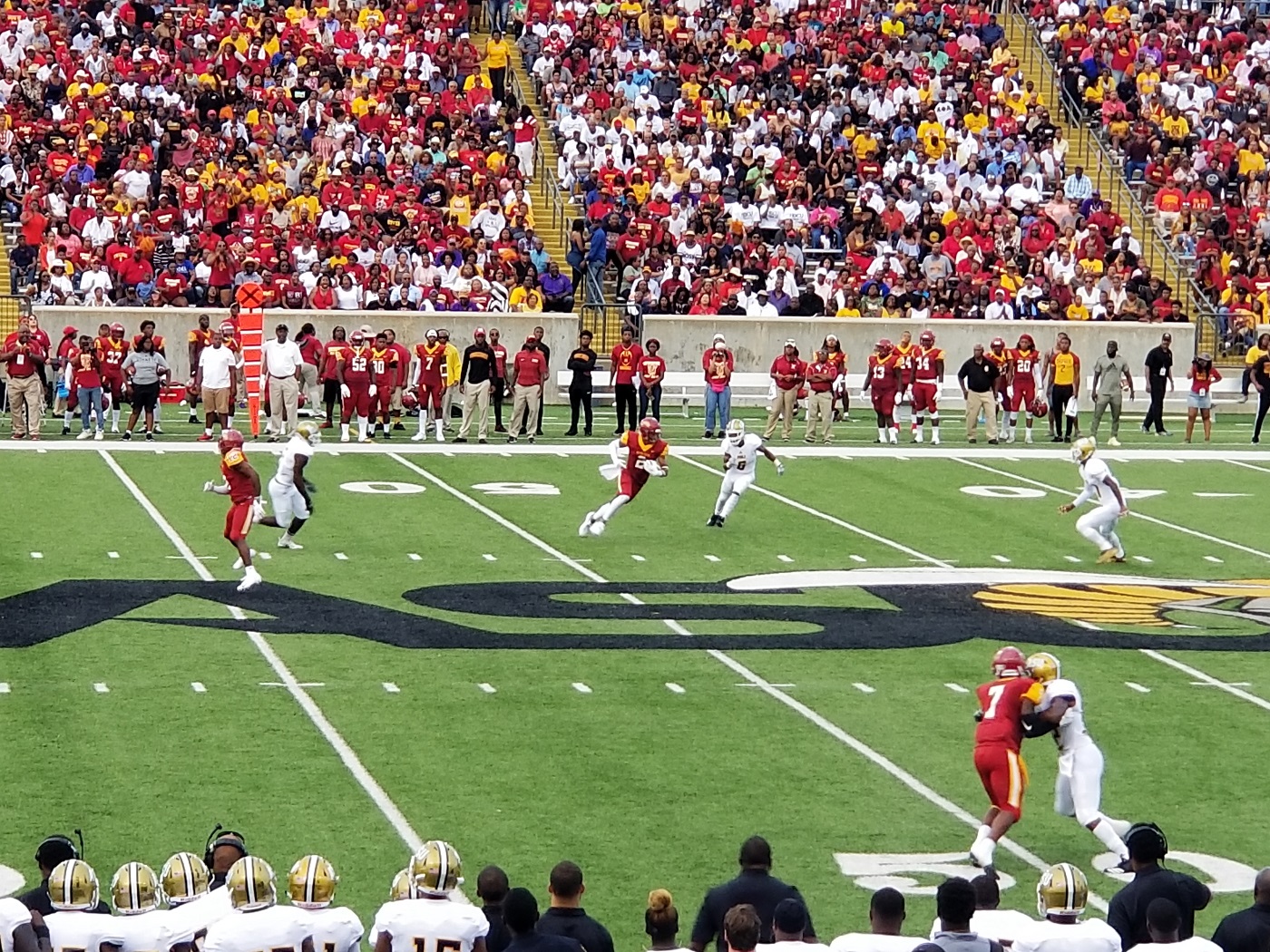 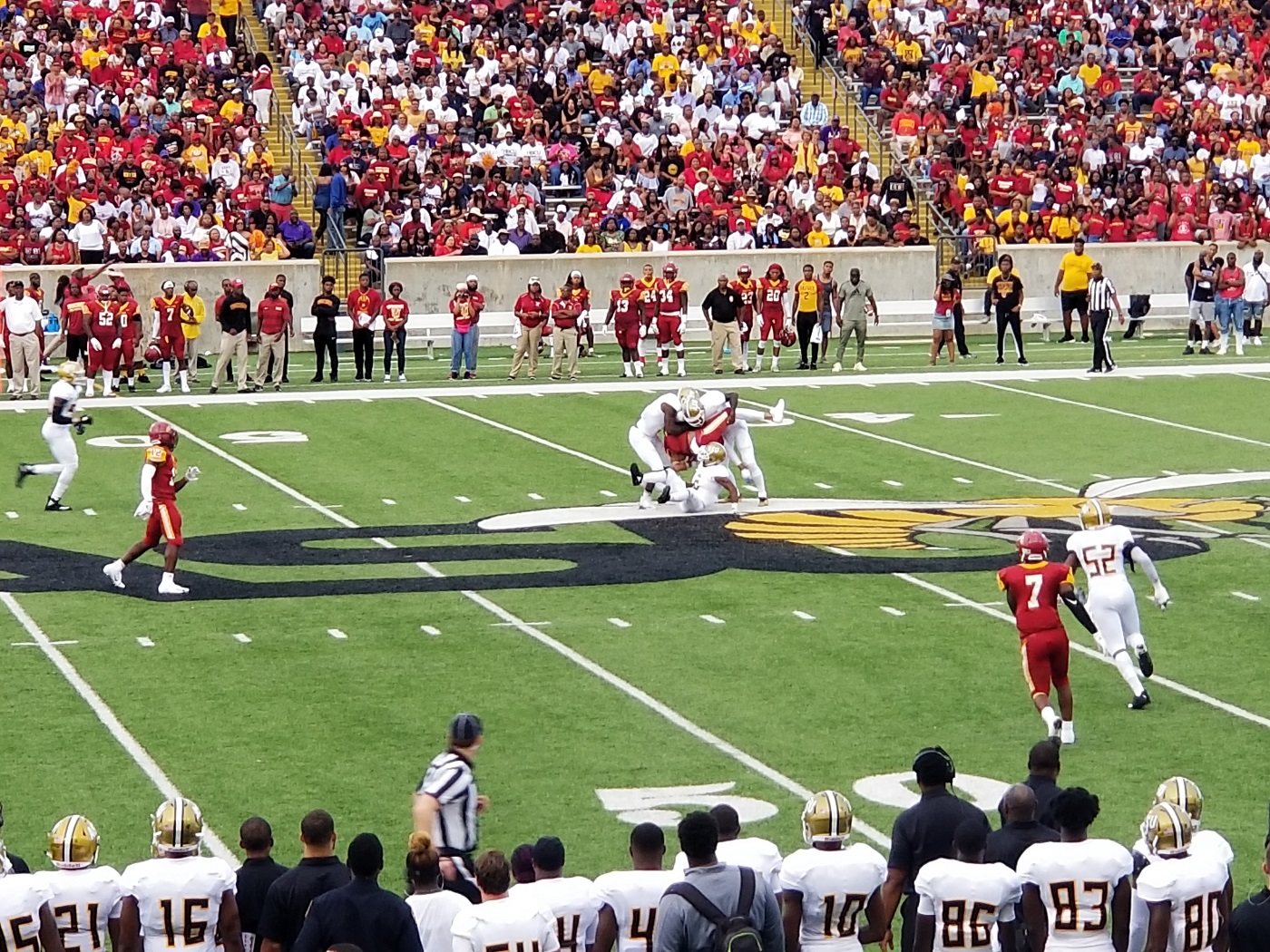 The second half started with Alabama State finding lightening in bottle with a 72 yard kick return by Jimmy Ferrell to Tuskegee’s 22. The excitement was short lived as the Hornets struggled to move the ball and had to settle for a 25 yard field goal to tie the score at 13. After a series of punts by both teams, Tuskegee again forced their will on Alabama State as they repeatedly pounded the ball up the middle on their way to a 15 yard score by Taurean Taylor. After a series of punts by both teams the third quarter came to a close and that’s when the fun and excitement began. The fourth quarter started with Alabama State in striking distance but in need of a big play to get back into the game. Unfortunately, their first drive of the final quarter produced lackluster results as they picked up 1 yard before punting the ball. 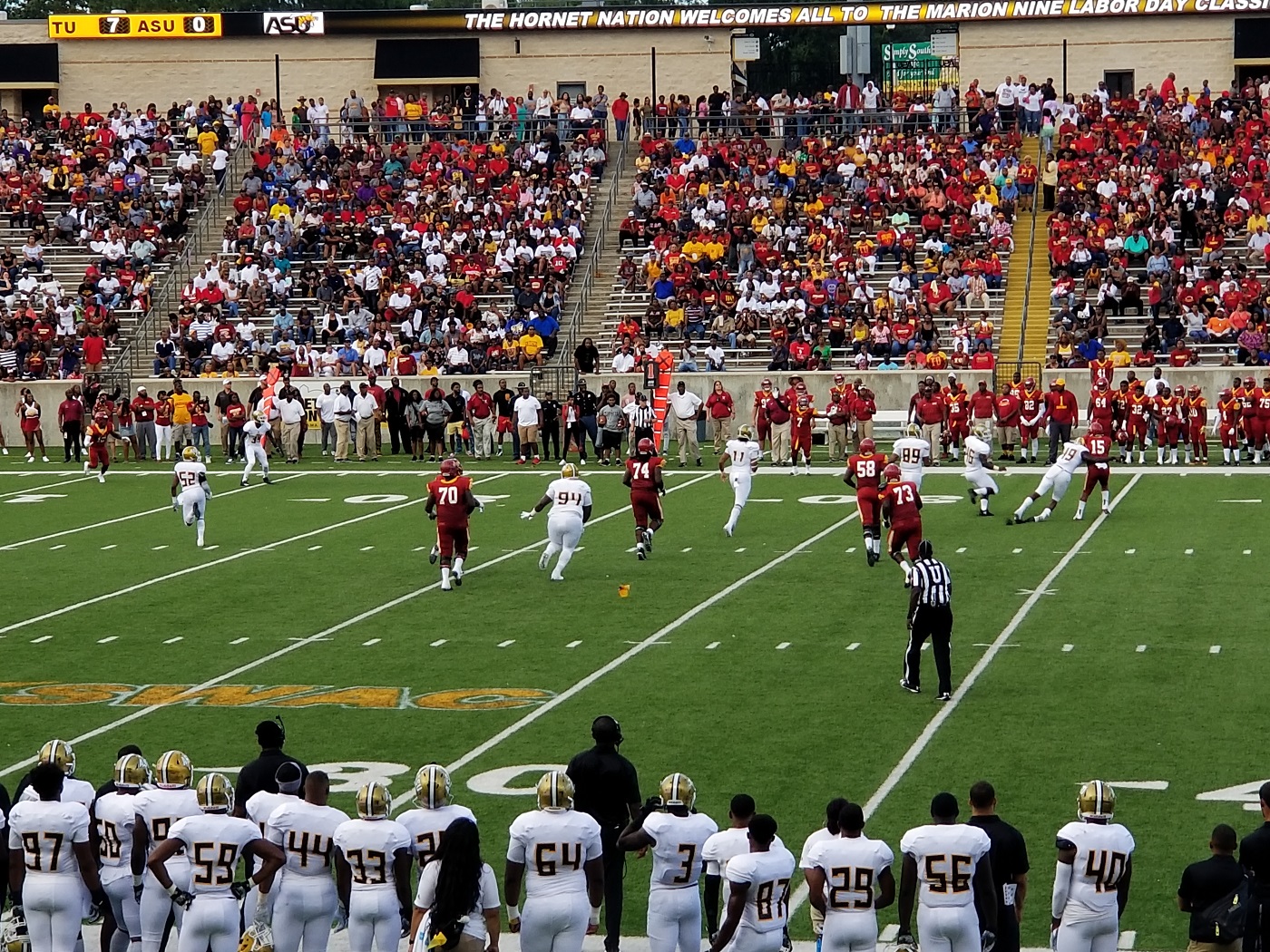 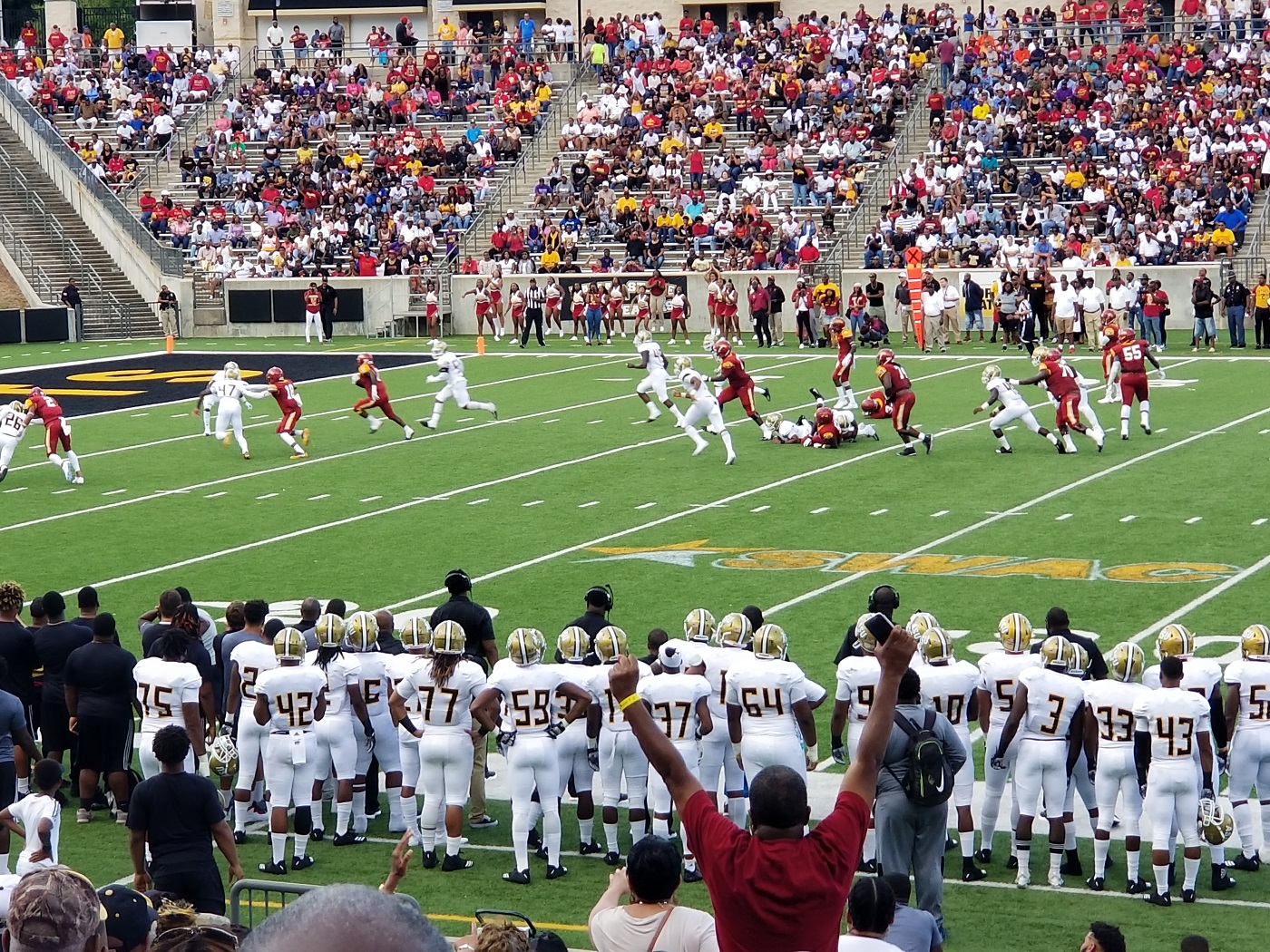 After the punt, Tuskegee was looking to close out the game and put the nail in Alabama State’s coffin. On their first play, Peyton Ramzy got behind the defense and scampered 65 yards before fumbling the ball out of the end zone on his attempt to evade defenders and dive for a score. This play completely changed the momentum and allowed Alabama State to find their second wind as they used a variation of deep passes and power runs to drive 80 yards for the game tying touchdown. After Tuskegee’s failed attempt to win the game in regulation, the game shifted to overtime. In overtime, Tuskegee fell completely apart before getting their 43 yard field goal attempt blocked by Christian Clark. On Alabama State’s first play of overtime, Ezra Gray turned the lights out and sent the fans in a frenzy as he went untouched for the game winning 25 yard touchdown run to close out the 101st edition of this storied rivalry. 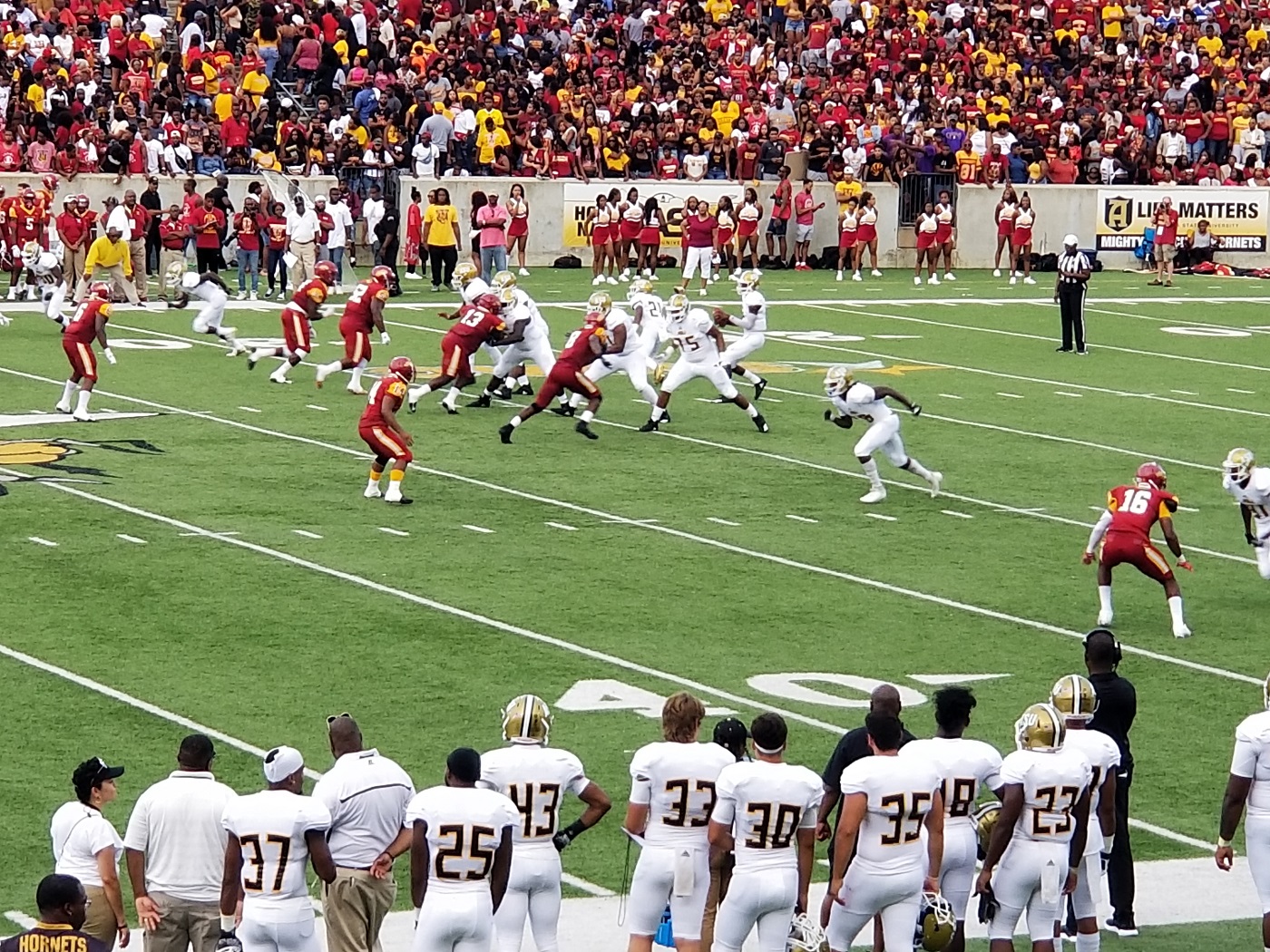 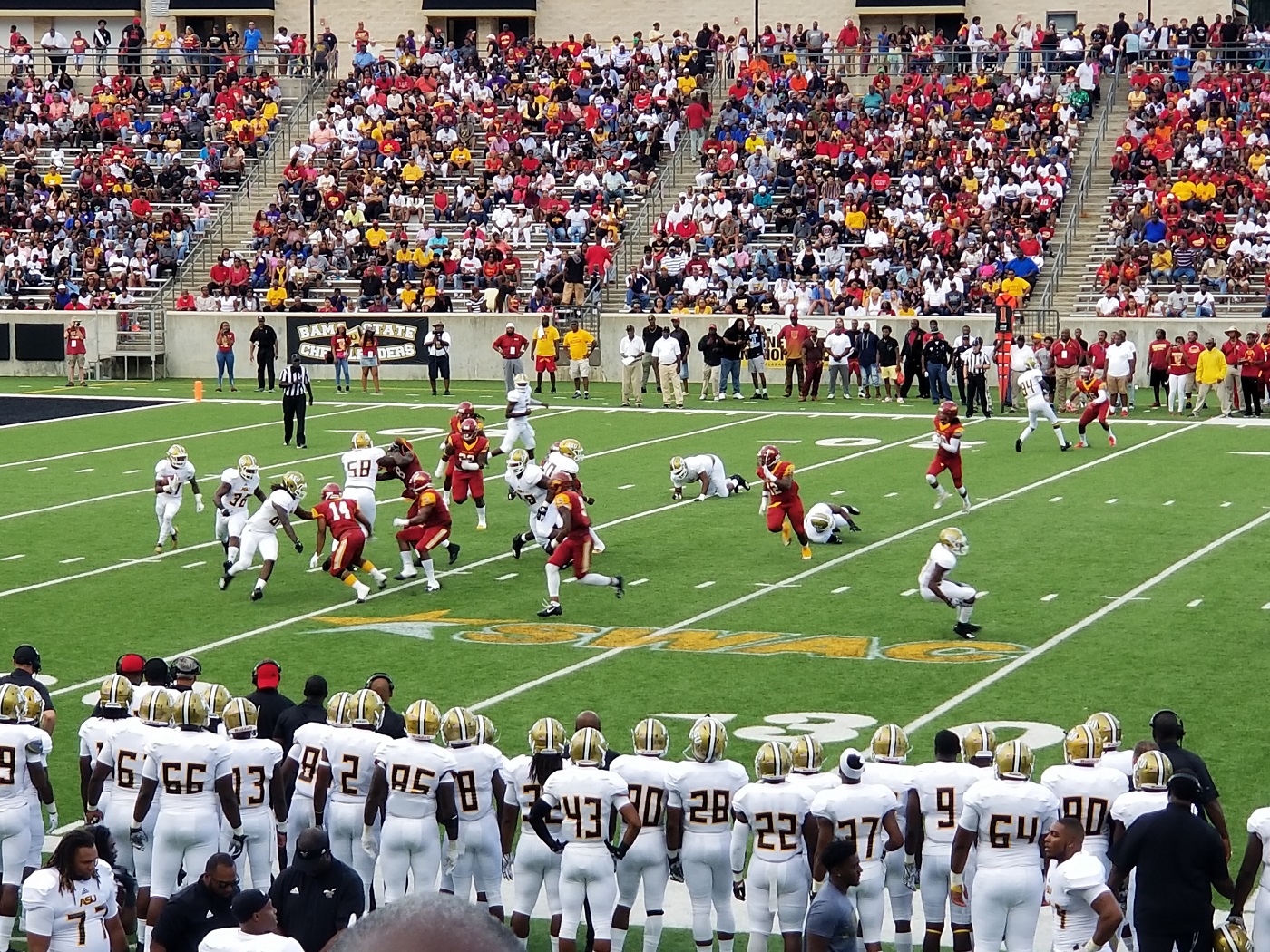 No HBCU game can be mentioned without talking about the true crowd favorites. The one group of individuals that sparks more debates than the teams playing on the field. The group that provides the fanfare and entertainment for fans throughout the game and during halftime. That would be none other than The Mighty Marching Hornets of Alabama State University and The Marching Crimson Piper Band of Tuskegee University. Both bands put on a show as usual but the marching band victory has to go to The Mighty Marching Hornets as they brought old school to new school with solid formations throughout their show. If you have never attended a HBCU football game before then make your way to one now to witness flash and substance in one place. Although the talent level and landscape has changed from the past, this is where the game was made and where your favorite Power 5 school pulled their current rosters from. 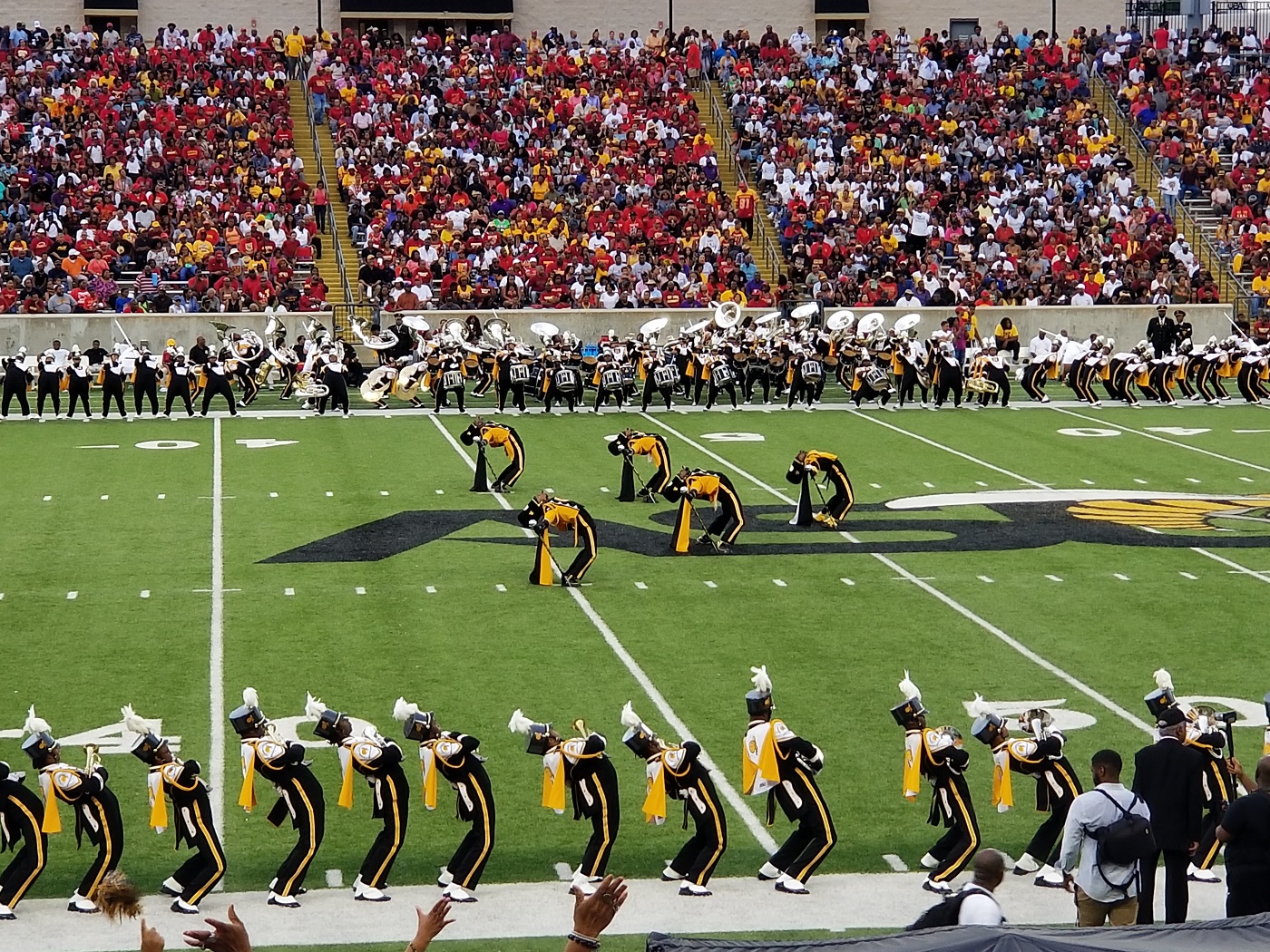 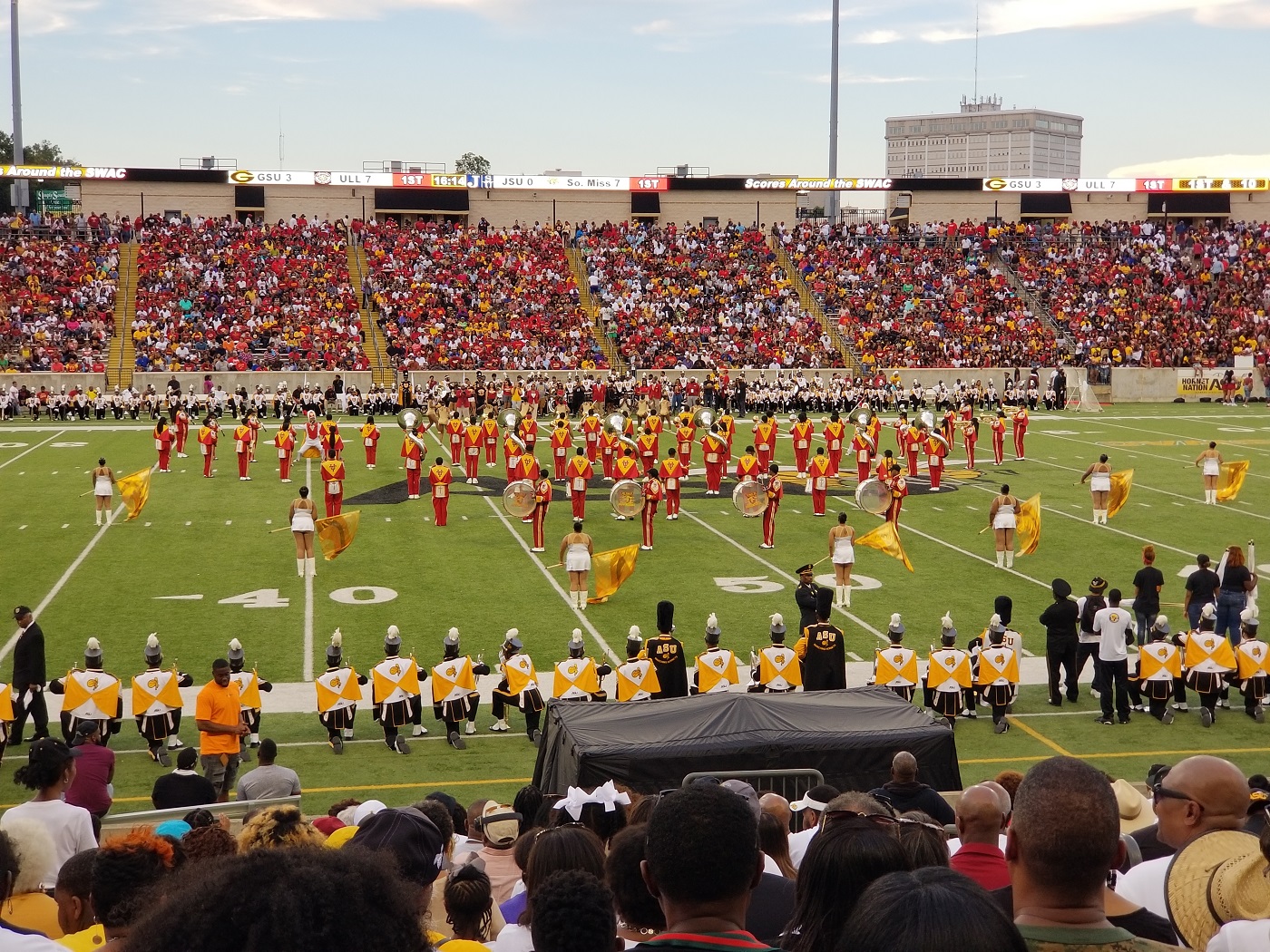